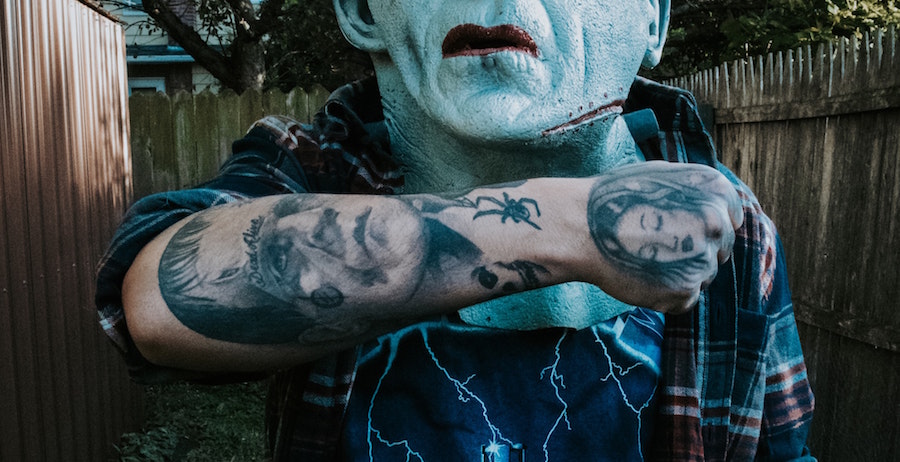 All Hallows’ Eve is upon us, and for some it’s a favorite time of the year, even more so than the Holiday season. It fact, it has almost become more popular with us supposed grown-ups than the kiddies. Recent data finds that over 70% of adults dress up and celebrate Halloween. But is it really so significant that people want it permanently honored via a tattoo? Absolutely, because Halloween is about more than a day to dress up, get candy, shoot-off fireworks, and party.

“If Halloween has become more popular among adults, it’s because traditional markers of adulthood have become less clear and less attainable […] Halloween, with its emphasis on identity, horror and transgression, can tell us about who we want to be and what we fear becoming.” (The Conversation)

The above assertion is validated by the fact that according to Google, every month (not just October) up to one-thousand Canadians hop online to search “Halloween tattoo ideas“. As one of Canada’s best known tattoo studios we can back this up. Our artists receive Halloween themed design requests from clients all year long. So here you are among them, in search of an idea that conveys your love of the unconventional holiday. Below are some concepts to consider.

A pumpkin theme allows you to express yourself in so many ways, especially a Jack-o-Lantern. One could say that the face we carve into a pumpkin each year is a mirror into our soul. When you walk through a neighborhood and spy the stoops of each home in October you’ll find the faces range from goofy to downright fierce. Of course, as a complex individual a singular expression may not be appropriate to who you are. Instead, consider the classic Comedy and Tragedy theatrical masks carved into a pumpkin as the tattoo theme. This would certainly be a statement-making concept. View more on pumpkin tattoo ideas.

There is one major debate that takes place around this time of the year – who is the greatest slasher cinema character of all time? Is it Freddy or Jason? Michael Myers or Leatherface? Chucky or Pennywise? Perhaps someone that is more on the fringe such as Captain Spaulding? If you get especially heated in this debate then you may be a candidate for a horror movie character tattoo.

There’s a reason Annabelle has become the latest horror genre personality to keep us up at night. Dolls are creepy AF. It works as a tattoo concept in so many ways, as you can choose the expression that best suits your personality, although “blank” is best if you want to really go for something scary. Especially twisted individuals (we know you’re out there!) may instead opt for doll parts, such as lone head or limb. Have a look at Pinterest boards of creepy doll tattoos for inspiration.

Halloween themed tattoos don’t have to fall on the dark side. Let’s not forget why we originally dressed-up for a night on Halloween Town – the candy! Your favorite Halloween treats will look incredible in New School or Cartoon style with vibrant colors. It’s one concept that will make you and others smile whenever you/they look upon it.

A self-portrait tattoo is kind of weird, BUT a “selfie” works great when it’s you dressed up in your favorite costume! This is the ultimate form of self-expression through a tattoo. Whether a sexy nurse, hard-hatted construction worker, or cosplay hero, choose a costume that exudes who you are and mark it on your physique to give everyone a peak into your soul.

Schedule a consultation to discuss Halloween themed tattoo ideas, or use our claim a tattoo platform that may already have something perfectly suited to your tastes.